Due to inclement weather, MLWGS will open two hours late on Friday, January 21, 2022. 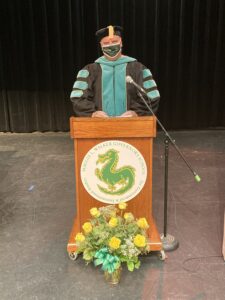 Today, our security team led us in two important drills that are part of our overall safety and security protocol. First, we engaged in an earthquake drill which called on us to take unified protective positions. Our earthquake drill was followed by a drill that called on everyone to evacuate to our athletic facility. These […]

Posted on September 6, 2016 by Barbara Marshall

Things are moving along according to plan on the first day.  Students progressed through their morning classes nicely and enjoyed a productive lunch period.  Students have two class periods this afternoon then dismissal at 3:10.  Buses are scheduled to depart at 3:20 but this week we will hold them until 3:25-3:30 to make sure students […]

Please enjoy these images of the class of 2020!  In just four short years…

As part of our performance contact with Siemens, the final phase of our effort to reduce our energy consumption is underway.  A performance contract provides for the procurement and installation of improvement measures that are designed to meet a specified level of energy savings thereby paying for themselves in guaranteed savings.  In addition to the […]

On heated green asphalt, the Dragons defeated a spirited Wilson Memorial team under a sharp Appalachian mid-day sun at Radford University on Saturday, June 11 by a score of 6-0 to win the men’s team state 2A championship for the third consecutive year.  Sincere appreciation is extended to Coach Todd for her stewardship of this […]

Last evening the 175 members of the class of 2016 and their families enjoyed a victory lap which came in the form of Senior Recognition Night.  Following a welcome by Ms. Todd (4-year class sponsor) which included an account of a number of firsts for the class, each student was endearingly “roasted” via prepared remarks […]

Get Out The Vote…”they” are making a run on us!

Old Rochester High School in Mattapoisett, Massachusetts is approaching us from the rear in the final leg of the USA Today “America’s Best Athletic Program” contest in an attempt to overtake our first place status.  If your schedule permits and you’d like to have a bit of fun with this, please consider voting! http://contest.usatodayhss.com/vote/2015-16-americas-best-athletic-program-group-round/final-round/final/18081

Debate and Forensics Return from California with Heads Held High!

The Maggie L. Walker Governor’s School Debate and Forensics Programs battled jet lag, 5:30 A.M. wake up calls for competitions, and up to 12 hours of competition as part of the Catholic Forensic League National Championship competition in Sacramento, California over Memorial Day Weekend.  Participating for Forensics in her second time qualifying for the Nationals was […]

Best Wishes for a Fantastic Weekend!

Please be aware of the unusual schedule we will encounter upon our return from the Memorial Day weekend:  Tuesday (ODD), Wednesday (Senior Showcase), Thursday (EVEN), Friday (ALL).  Happy Memorial Day! Photo Courtesy of Harold Flynn/U.S. Army