Posted on February 7, 2020 by Barbara Marshall 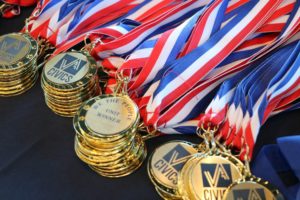 VA Civics We the People Medals

Virginia’s ‘We the People’ championship was won by the team from Freeman HS this year. Congratulations to the Freeman students and sponsor who worked diligently to earn their win. Maggie Walker has won the state championship 21 times in the past, so we understand and appreciate how much effort was put into Freeman’s success this year.

However, in a turn of events, the Freeman team has declined their invitation to the National competition. Therefore, Maggie Walker will be attending as Virginia’s representative team.

Breaking news: Virginia has scored an additional ‘wild-card’ team for this competition, so Glen Allen HS has also earned the honor of attending.

During the competition, students are divided into units and prepare a presentation on their focus area and then participate in simulated congressional hearings on a wide variety of topics from natural rights to immigration and Congressional representation.

The MLWGS team will travel to Nationals in Washington, DC April 24-27.