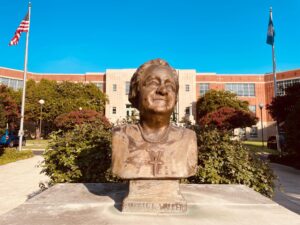 Ms. Lynn Reed, a senior seminar teacher, has invited two extraordinary guest speakers to join the Polar Seminar via Zoom on Monday, May 9.   Lonnie Thompson and Ellen Mosley Thompson are giants in the field of paleoclimatology who have devoted their careers to collecting ice cores from the polar regions (Ellen) and high altitude, mid-latitude glaciers (Lonnie).

“Distinguished University Professor and director of the Byrd Polar Research Center (BPRC) Ellen Mosley-Thompson is a leading expert on the study of ancient climates. She has led nine expeditions to Antarctica and six to Greenland.  Distinguished University Professor and BPRC senior research scientist Lonnie Thompson has led more than 50 expeditions.  His observations of glacier retreat over the last three decades confirm that glaciers around the world are melting, clear evidence that the warming of the last 50 years is now outside the range of climate variability for several millennia.”  Both are members of the National Academy of Sciences.

To get an idea of what the Thompsons will be talking about in their presentation, Ms. Reed invites you to watch the following 9-minute clip from the PBS News hour:  https://www.pbs.org/newshour/show/glacier-ice-samples-act-as-records-of-climate-changes-impact-on-earth

“I am excited that these renowned scientists will be joining us on Monday to talk about the importance of ice cores in understanding climate change,” said Reed.