Posted on September 22, 2022 by Barbara Marshall

In education, making a difference is mutual.  What we give is returned tenfold when our students go out into the world and soar.  And when they come back and tell us about it, that’s even more priceless.

This week two of our teachers reached back to their former students in order for them to reach out to their current ones. 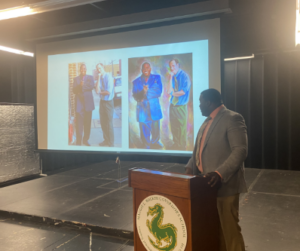 Jeff Hall featured Stanley Rayfield as his first guest for the lunchtime lecture series. Stanley has had his award-winning portraits acquired by the Pentagon and the VMFA. Collectors of Stanley’s artwork include Academy Award-winning director, Spike Lee.  Most recently, Stanley completed the official state portrait of former VA governor, Ralph Northam. This portrait is currently on display at the VA State Capitol.  Stanley told our MW students to follow their passions and to be intuitive in navigating a pathway to success. 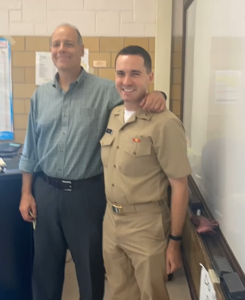 John Wilkes invited Matthew King to speak to one of his freshman classes about fortitude and working hard to achieve long-term goals. Since his graduation from MLWGS eight years ago, Matthew has accomplished so much.  He was an editor for the Wall Street Journal and recently worked with Henry Kissinger on his newly released book, Leadership.  Matthew showed up this morning all donned in his U.S. Navy uniform (three weeks ago he graduated from OCS).  Matthew began his talk by stating that Maggie Walker has been one of the most amazing parts of his journey.