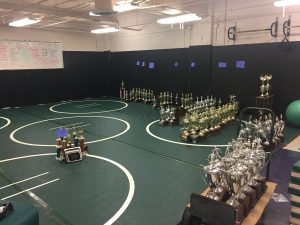 What an outstanding year the MLWGS Dragons have experienced in fall and winter sports!  Below are some of their highlights with many that accumulate to the school record for the annual Wells Fargo Cup. The Wells Fargo Cup goes to the school in each group classification that has achieved the best overall record in VSHL state-level competition in 27 sports and 12 academic activities – the state champions’ state champion.

Weeks #1, #7 and #10 – Lexus of Richmond, Pursuit of Perfect Leadership Award Weekly Winner, with at least one more winner to be announced.

MW junior named All-Metro Cross Country Runner of the Year for the second time by the RTD.

MW qualified for the 2A Golf State Championship for the first time.

MW Boys and Girls win Indoor Track State Championship…this is the sixth consecutive year for the girls while the boys recaptured the title this year.

MW junior is back-to-back 2019 State 2A One-Meter Diving Champion. This represents the fifth consecutive State title for MW in this sport.

MW Swim Teams at Regionals: the Girls repeated their 1st place finish for the fifth consecutive year, while the Boys also earned 1st place repeating their Regional win from 2018.

MW Wrestling had 3 Regional Champions and qualifies a record number for the State championship. MW Wrestling with individual State Champion.

MW Girls Basketball with 3 players earning All-Region team; one on first-team, two on the second team.

MW Girls Basketball tips into the VHSL State Tournament for the first time in school history with an exciting run into the second round. The team finished 4th in the State.

Congratulations to all of our athletic teams…you’ve demonstrated great commitment to your team in addition to maintaining your academic workload.  Coach Hawkins is a proud Dragon Athletic Director.