Posted on December 4, 2019 by Barbara Marshall 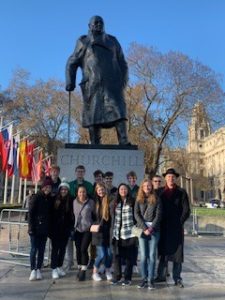 The students of Mr. McGuire’s AP Comparative Government in London.

This morning our students were scheduled to meet with Conservative MP (Member of Parliament) Iain Duncan Smith in his office in the House of Commons. Mr. Duncan Smith served as Official Leader of the Opposition between 2001 and 2003 when he was Tony Blair’s most visible critic. More recently he served in Prime Minister Cameron’s cabinet and he’s now an extremely forceful advocate for Brexit. The state of Brexit will be a focus of conversation, but Duncan Smith is happy to answer all sorts of questions related to his experience.

In the afternoon students will have another meeting in the House of Commons with Ian Blackford MP. Mr. Blackford is the leader of the Scottish Nationalist Party within the British House of Commons. Possible Scottish independence will be the focus of conversation.