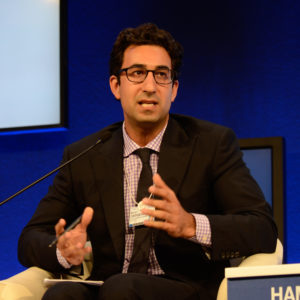 On the weekend of March 20-21, the Richmond Forum and the 23rd Annual Governor’s School  Model United Nations Conference (GSMUN XXIII) will bring together students from around the east coast to learn more about our changing world and how we can make a difference.

Delegates will get to listen to a keynote speech by Karim Sadjadpour (pictured above), Sadjadpour is a senior fellow at the Carnegie Endowment for International Peace, where he focuses on Iran and  U.S. foreign policy toward the Middle East. He is a regular contributor to the Atlantic and has also written for Foreign Affairs, the New York Times, the Economist, and The Washington Post.  Sadjadpour regularly advises senior U.S., European, and Asian officials and has testified numerous times before the U.S. Congress. He is an adjunct professor at Georgetown University’s School of  Foreign Service, teaching a class on U.S. foreign policy and the Middle East. He was previously an analyst with the International Crisis Group, based in Tehran and Washington. In 2007, he was named a Young Global Leader by the World Economic Forum in Davos. As the former “chief Iran analyst,” Sadjadpour can provide great input into the relationship between the United States and  Iran today. Maggie Walker is honored to host him as the keynote speaker for GSMUN XXIII.  Courtesy of our partnership with The Richmond Forum that began in 2015 with GSMUN XVII.  Since then, the conference has been fortunate enough to host many prestigious keynote speakers,  including the Honorable Ehud Barak, former Prime Minister and Minister of Defense of Israel, Ben  Bernanke, former Chairman of the Federal Reserve, and Gordon Brown, former Prime Minister of the United Kingdom, and Ian Bremmer, President and Founder of Eurasia Group.

In previous years, the conference has supported charities such as One Hundred Pounds of Hope and Project HOPE. Last year, GSMUN raised over $13,000 for the World Pediatric Project, an international charitable organization dedicated to the treatment of children in need of lifesaving care.  This year, GSMUN XXIII is excited to be teaming up with the StrongMinds. ​StrongMinds helps to tackle the depression epidemic affecting women in Africa by providing talk-based therapy in Uganda and Zambia. In Uganda and Zambia, as many as 25% of women suffer from depression, and 85%  of those suffering have no access to treatment. StrongMinds has already helped to treat over 50,000  women, and an additional 5,000 are currently in talk therapy groups. With your support, GSMUN  will help StrongMinds achieve its goal of treating 2 million women by 2025.​ In addition to our keynote speaker, the conference is also hosting a charity speaker. This will be Rasa Dawson, the  Director of Development at StrongMinds. Those wishing to make a contribution to the conference charity may contact ​gsmun.giving@gmail.com​; more information on the charity can be found on  StrongMinds’ website at ​https://strongminds.org/​. For information on corporate sponsorship levels, please contact ​gsmun.secgen@gmail.com​.

GSMUN brings students together from surrounding counties and cities to debate important international issues and to develop diplomacy in the next generation of world leaders. In March
2019, nearly 500 delegates from schools in central Virginia and surrounding areas discussed, debated, and found solutions for some of the greatest challenges facing our world today. GSMUN XXIII has been organized through the year-long efforts of our eleven-person secretariat board and the Model UN club sponsor, Mr. Smith. Our committees this year include the Silicon Valley: Tech Giants, the Transitional Military Council of Sudan, a joint crisis committee on the Malayan Emergency, 5 fast-paced UN Core Committees, and many more. These committees are the product of 10 months of planning by the secretariat board and our dedicated dais members. All the students and staff involved are incredibly excited to see the level of debate and fundraising that our delegates can bring throughout the weekend. More information on the conference schedule and background can be found at https://www.gsmun.net/ .