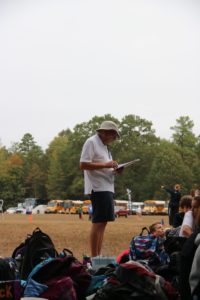 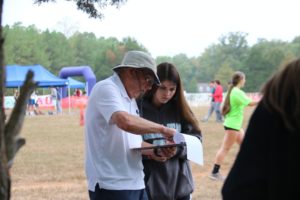 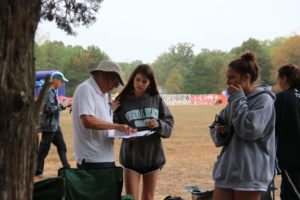 On Saturday, June 11th, the track team planned and coordinated a tribute to Coach Holdren celebrating his 60 years of coaching along with his birthday under the disguise of their annual end-of-year track banquet.

Sixty years of coaching. Five National Coach of the Year awards. Thirty-two years at the Governor’s School. Sixty-two All-American. Forty-two team state titles. 115 state champions, and 11 national champs. By the fall of 2021, Jim Holdren had accumulated several lifetimes’ worth of honors and achievements. So what kept him coming to work every day to coach state champs and novices alike? “I care about the kids a lot,” he said. “That’s the real joy to me: the relationship with the kids.”

After running cross country and track at Thomas Jefferson H.S., the native Richmonder competed at William & Mary, where he also coached teammates and spent his senior year as interim coach of the cross country team, leading the squad to state and conference titles and to the national championship.

The math/chemistry double major pored over technical journals to grasp the science of running. “I was a student of the sport,” he said. In 1964 he returned to TJ to teach chemistry and math and to coach the cross country and track squads, which merged with the Governor’s School in 1991.  In 2001, having declined offers to coach college teams, he moved to the new Maggie Walker. “I had a knack for teaching,” he said, “and the real coaching is at the high school level.”

Amidst the trophies and honors, Coach Holdren thrived most on relationships, and his runners seemed to agree. “The moments where Coach pulled me aside to say ‘Good job!’ meant the most to me,” said Avery Crumlish, Senior. “He never said anything he didn’t mean, so I knew the sentiment was genuine.”

Said Coach Holdren, “The medium is track and field, but the job is knowing kids and caring about them. The key to being a good coach is loving your kids for who they are, and not how fast they can run.”