Posted on November 6, 2019 by Barbara Marshall 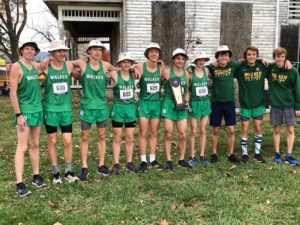 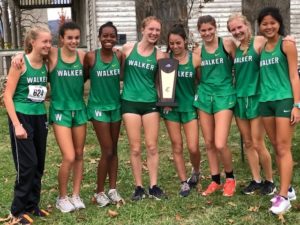 On Tuesday, November 5th in Woodstock, VA the boys and girls Cross Country teams each won their 7th consecutive Regional Cross Country team title, but their first at the VHSL Group 3 level. Competition started at 3:00 pm with the Boys Championship race. The Green Dragons entered the competition as the favorites but would be running with only two of their four best runners due to illness and injury. Any doubt about the teams’ outcome would be quickly erased, as Senior Captain Ben Neuwirth was never more than a few strides behind the lead pack and closed well over the last 800m of the race to earn a 3rd place finish. Sophomore Ben Blanchard joined his senior teammate in the top 10 finishing 8th, and a very strong run from senior Miles Nardi earned a 14th place finish and 3 Green Dragons on the All-Region team. Sophomores Everette Flora (16th) and Quinn Neary (23rd) rounded out the 5 scoring Maggie Walker runners, and sealed the team score at 64 points. Despite the stress of missing two key team members the boys easily outpaced the runners up from Brentsvillle District (84 points) to claim the regional title and advance to their first Group 3 state championship meet.

In the girls’ race, the Lady Dragons were missing one of their top three as well, but the competition was significantly less stressful than what had transpired in the boys’ race. Senior Mary Caroline Heinen lead the individual race from start to finish with relative ease. M.C.’s win is her third consecutive individual regional title, but it was the performance growing behind her that was the talk of the show. Following Heinen’s individual victory, Freshman Brenna Luczak was on a mission from the start and took home a 3rd place finish, but the Dragons refused to stop there. Fellow Freshman Gracie Pershing had the fastest final mile of anyone besides Heinen, moving from outside the top 10 to a 5th place finish, one second later Sophomore Alexis Bartee had earned 6th, and only two additional seconds were needed for Senior Josie Greer to continue a comeback season for the record books as she closed out the Lady Dragons scoring 5 with a 7th place finish leaving no doubt that the Lady Dragons would be headed to their first Group 3 state meet as well. The girls’ 22 point performance was 65 points better than the runner up team from Brentsville. In the end Mary Caroline’s official time of 17:25.9 on the hilly 3-mile course was not only a new Region 3B record, but the fastest girls time ever run on the Central High School Cross Country Course.

The Group 3 State Championship races are scheduled for Saturday, November 16th in Salem, Virginia. The girls’ race will start at 1:00  pm with the boys’ race following at 1:45 pm.